It's been some time (many, many, many... uh, many) months since I've written anything.  I discovered something this afternoon that deserves updating though.

Back in December of 2012, I wrote about the Mystery Chain that had been handed down to me by my mother.  She always told me that the chain was a set of hand-cuffs used by her father while he was working as a police officer.  The problem was that I had never found any evidence of him being a part of law enforcement.

This afternoon I pulled up my grandfather's wedding record from 1939, the year that he married my grandmother.  His listed occupation: "Deputy Sheriff".

So, it seems like there may be some truth to the story of the Mystery Chain.  I'm still not completely convinced that he was in law enforcement, based on all other evidence that I've found, but it does appear that on at least one occasion, he is documented as being a Sheriff.
Posted by Elroy Davis at 4:16 PM No comments:


Today was the Fall meeting of the Genealogical Society ofVermont (GSV), which took place in Rutland, Vermont.  I joined the Society last year, but wasn’t able to make it to the Spring meeting, so this was my first exposure to the group outside of reading the newsletters and a couple of interactions with the Facebook group.

I was very pleased with the meeting.  There were just under 30 people in attendance, most of who seemed to have known each other for some time.  Despite being a newcomer, I didn’t feel unwelcome at all.  I chatted with a few people, and found some common research interests.  The highlight of the meeting, however, was definitely the three presentations that were given.

The first speaker, William Powers, Jr., gave numerous examples of the importance of finding several sources of documentation before coming to a conclusion.  Cases ranged from incorrect tombstone inscriptions to census records with similar, but not correct names.  The presentation was entertaining, and the speaker was excellent.

Michael Dwyer gave the next presentation, which was a summary of his search for third great-grandmother’s husband, Silas Hall.  Again, the speaker was entertaining and the information interesting.  He showed how some ancestors “flavored” their stories, sometimes making them more difficult to track down.  In some cases the flavoring may be an innocent embellishment of facts.  In other cases, such as Silas Hall, the flavoring may be more purposeful (such as having three wives).

After attending this meeting, I’m looking forward to attending more next year and possibly becoming more involved with the Society as I get to know the organization more.
Posted by Elroy Davis at 11:06 PM No comments:

Friday Founding – The Start of My Life 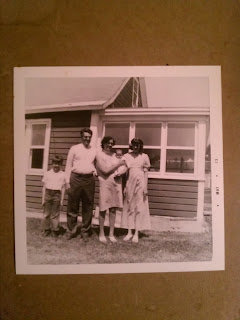 I don’t have many baby pictures of myself.  I know I’ve seen a few, but somehow they haven’t come into my possession.  The photo shown here is of my family, about 5 months after my birth.  We’re standing in front of my grandmother’s house, which was just below the house that my parents built when my sister was small.  Based on this photo, I’d say that I was a pretty typical bald little infant.

The start of my life, however, based on what I’ve been told, wasn’t boring.  First, my mother, due to a medical condition, wasn’t supposed to have any children after my brother.  Not only did she give birth to me, she lived long enough to see me graduate from college.  Next, I arrived a month earlier than expected.  My mother always told me that I didn’t want to miss 1972.  Being a month premature, I was transported from the hospital in Springfield, VT to what is now Dartmouth-Hitchcock Medical Center where I spent my first few days in an incubator.

Everything must have turned out well.  At some point, I’m guessing before Christmas, my parents brought me home.  Since I was a near Christmas baby, they brought me home in a stocking.  I remember my mother showing me the stocking one time when I was a kid, but I’m not sure what happened to it.  The stocking, apparently, was a gift from the hospital to all of the December babies.

The best story from my birth?  I have a small flat spot on the end of my nose, roughly the size of a fingertip.  My mother used to tease me by telling me that I when I was born the doctor put his finger on my nose and said “Awww…  He’s sooo cute!” and my nose stuck that way forever.  The story may have been a fiction, but my flat-tipped nose always makes me smile and think of mom.
Posted by Elroy Davis at 10:37 PM 1 comment:

As a sixth-generation Vermonter living in the same area as my ancestors, I have a great interest in family and local history. This interest has led me further and further into the field of genealogy, which I have pursued as a hobby for the last twenty-five to thirty years. In the past few years I have begun learning more disciplined approaches to the field, and have started revisiting the ancestors that I gathered during my name-collecting days.